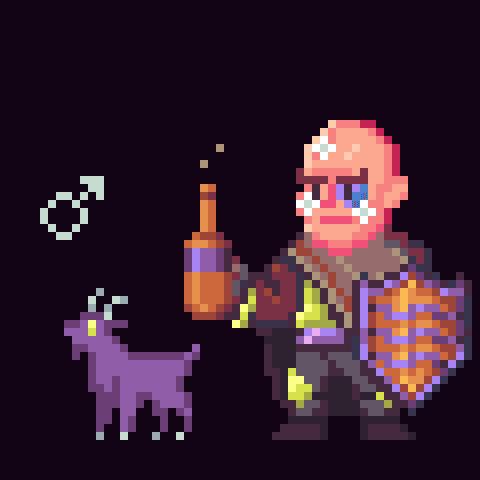 Doug and his brother Scott grew up on a small farm in Pennsylvania. Their family made its living farming and raising goats, but since the beginning of the Covid 19 pandemic, the boy found their true calling: doing stupid stuff on the farm, filming it and posting it on youtube. They were a pandemic youtube breakout success.

While currently, their account has been suspended due to "the government trying to suppress the truth" or whatever, hopefully some day their videos will be retrieved and uploaded to Arweave or something, where their idiocy can be celebrated by all.

But, secretly, both Doug and Scott always wanted to be fighters. As boys, they played in the woods with home made swords, telling crazy stories of their imaginary adventures... In their more recent years, they have been thrown out of most every bar in their home town for climbing up on stage during shows and trying to fight the musicians. Usually caught on video, these antics helped their youtube star rise!

So, when they found out their neighbour down the road had been hired by a Wizard Cult to bring a pony to downtown Manhattan for a party, they just had to go!

They hitched a ride in the back of the truck for the four hour journey to NYC. The boys had never been to New York and were in awe of the city! Truly amazing.

They had heard that security was tight, so they slipped into the alley way around the back of the building:!

There, they found a team of workers moving oversized mushrooms, bar equipment, and various other items for the event in through the back doors. Grabbing a piece of gear, slipping in was no problem at all!

"You there, give me a hand setting up the Gate to the Seventh realm!" Doug and Scott looked at eachother... "COME ON, DOORS ARE IN 20 MINUTES! LETS GO!" the stage lead shouted.

Not wanting to blow their cover, they fell in line and followed the lead. Around the corner, they saw it: the Gate to the Seventh Realm in all its glory!

Right then and there, these boys knew this was the beginning of something special, although they had NO CLUE what was in store for them in the hours to come...

jumped up onto the stage, running his hands up and down the majestic arches of the gate. "Oh yea, this is bitch'n. Gigas Chad approves! Thanks for helping bring this to live boys! Come on round back, let's go do a shot before this party really gets going!"

The boys looked at each other... still totally confused, but not interested in turning down free shots with probably the coolest looking bro in the world.

"Drink up boys! This magic juice has the power to bring us all into the Runiverse! Let's go!!" Oliver Tree said as they all chugged their mystical drink.

"Damn, you guys know how to party huh? This city is full of fakers and posers, but you guy are the real deal! I need more people like you in the Chad Army!"

Doug and Scott said goodbye to the Gigas Chad to who said "Find me on stage later alright? We will party like the yellow wizards! And dude: I love that hat! Mind giving me that hat later? It a sweet hat!"

In that moment, they all felt a tingle run up their spine... something magical was beginning...

The night wore on and the boys tried their best to blend in. Two farm boys from the country had to make up stories about themselves though... it wasn't long before they started introducing themselves as their made up characters:

"I am Draxon of Destiny!" Doug said to some giant green witch man and they drank!

"I am Warrior #13411" he said to a bunch of people calling themselves morons.

Before too long, the boys were both hammered. And I mean truly krunk. There was something a little magical about these cocktails and it gave them both a sense that the Runiverse was their true home... their true calling!

Then: The show started!!

There was the man, the myth, the legend, Gigas Chad himself!

Maybe it was the drinks, maybe the !magic, maybe the invitation from the Chad himself, but Doug decided this was his moment: Up on stage he went! Dancing with the Chad parting on. It was then Doug remember that the Chad had wanted his hat, so he tried to give it to him: well well...

Doug's Dance with the Chad!

Doug went down but the epic beating he endured as the Chad pounded on him punched holes in the fabric of reality! A gate had been opened!

As the bouncers dragged Doug and Scott away from the stage, they saw the party continue on! As they were thrown out the doors of the party they were cast through a portal:

Instead of landing on the streets of New York City, they tumbled out of the tavern onto a muddy, dirt street. Picking themselves up, they looked around.

Gone were the tall buildings, gone was the pavement and streetscape. The rumbled of subway trains was replaced with horse drawn carts and carriages.. They looked back, and what was the party of the Wizards was now a busy tavern. A pair of imps tumbled out onto the street after them, laughing and singing in some foreign language. A purple wizard muttering to himself walked into the bar and a they could see a lady with a giant Gae Bolg arguing with the bar manager about what a "reasonable size of weapon to bring into a tavern was".

The brothers looked at each other and shouted in unison:

And so began the adventures of Draxon of Destiny and Scott of the Swamp!