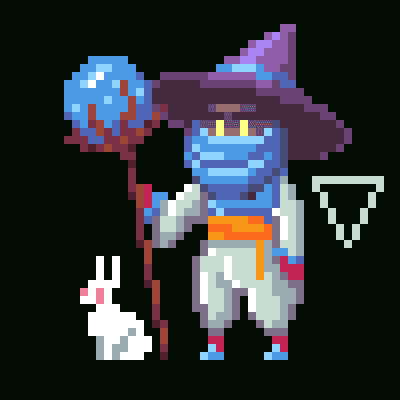 Lore of a stranger who came out of the sand

Traditions & identifying characteristics of the sub-cult.

Beside practical reasons, you will never find out what kind of face is hidden behind the face towel of a Sandland Magus, only the fiery glowing eyes are freely visible. 🔥 🔥
They usually wear fine, silky fabrics. As well as imposing magic hats, which are also practical especially when the sun is burning.

Rumors about Magus Jabir "of the Oasis" 👁️

The Stranger from the sands, known as the Eye of the Desert

Magus Jabir is mainly found in the region around the > Zaros Oasis. But watch out, he sees you long before you would notice. He possesses one of the rare and powerful Orb Staves. The orb of an orbital fragment of bygone times and worlds ☄️, grants channeling magic to its wielder. He can use it to form a desert eye that carries his spirit🌬️ across the dunes and spy everything that doesn't have sand in its heart & soul.

Also not to be forgotten is that he carries the Rune of Water 💧. He will always find a way to survive in the desert, the oases calling his name as he listens to the wind in the sandlands.

There's only one other sub-cult that might know more about the strangers from the sands. Few know about the entanglements of the Green Mages and those who seem lost in the sand. Who knows what can be found in the secret writings in the green tower, deep in the forest in > Green Wizard City.

I keep searching, I'll reveal the scriptures and figure out the context..My journey will only end, if I get lost along the way.