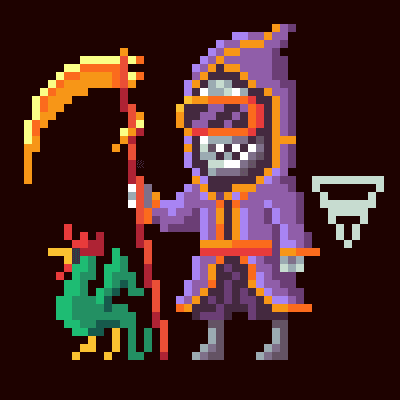 # Arcanist Dr. Death of the Ether ## Prologue > __Therefore, dear wizards, I have come to firmly believe that the sanctity and severity of the matter postulates our required course of action; According to our most trusted Cosmic Mages, the Veil shall soon be parted, and The Sacred Flame will present us with an opportunity.__ > > __As you are all aware, our most experienced Diviners and Cartomancers have long warned us; there are malevolent and dark forces at play in the Deck, players who surely will not shy from the chance of reaching beyond, transcending, transmuting and becoming one with the Cosmos. And should those whose intent are on chaos and destruction, willing to again raise ancient armaments - our wayward brethren of Void and Abyss among them - harness powers hitherto unfathomable, I fear we will face peril to our very existence.__ > > __And so I plead and beseech you Holders of the Flame; we must not waver, nor plot, scheme and levy for leverage amongst ourselves; we must be unified, bold and decisive. Seek out those worthy and willing to risk the Immolation and convince them of the necessity of this ultimate sacrifice, sway them with promises of Sacred Souls, if need be, but sway them you must.__ > > __What we need now, councilmembers, are willing martyrs.__ > > An Appeal for Martyrs > > __The Sacred Council__ Amidst twisting mists, eddies embracing deep purple robes, swirls playfully lapping at his heels, the hooded and caped figure strode forward slowly. Near an eternity has passed since his feet had trod these paths, since the comforting presence of the Event Horizon tugged at the very core of his being. The coruscating convergence of energy emanating from the singularity was potent here near the epicenter. Enough to saturate and kill in mere moments, but of no concern to a Cyborg. Reminiscent of a lost lover’s embrace, there was an eagerness to the sensation, near akin to desire, which, had he still had a face, would have pulled at the corners of his mouth, flaunting his once infamous smirk. There was a certain sound, like that of a draft under a door defending against a mighty gale - or possibly more fitting a door trapping an unwilling tempest within – accompanying the soft thud of his footfalls and the rhythmical tap of metal on stone. The ghostly and unnerving sound had only gotten stronger over the centuries as its source gluttonously harvested and consumed Souls, the enormous golden scythe’s hunger nearly palpable. Up ahead, the questing tendrils in the tepid air formed an eerie halo - as if the moon herself had descended from the heavens to grace him with her presence – surrounding a figure he knew intimately but had not seen in a very, very long time. “Dr. Death, it is a welcome sight to behold your gristly visage once again,” rasped the luminescent figure. It was difficult to remember a time his name had been uttered not as a curse, but with warmth and familiarity, and it surprised him to feel a stirring of pleasure where his heart once resided. “Voidoth, it has been too long. Are you prepared?” he asked, halting in front of his companion. “I trust the timing is flawless. It would be a terrible waste if all our long-laid plans were to fail at this crucial point in the timeline”. “Ah, ever the pragmatic. Yes, everything is in motion – and the Veil will soon part,” Voidoth said, the Lunar staff in his hand pulsing as if in confirmation. “All we need is simply to Burn.” “We already died once, you know,” Death commented. “Indeed, we did old friend. However, this time may our Souls pass through the Veil and beyond”, Voidoth said as his magic began coalescing around him, enhanced and flavored by his alignment with Earth, manifesting the Sacred Flame before his skeletal frame. Adding to the growing vortex, Dr. Death similarly drew on his magic, channeled through his Soul Harvester, his own Flame flaring into existence with a hiss of crimson. “They will be expecting this, you know. We may well be contested.” “Oh, I certainly hope they are, for they may be in for a surprise”, Voidoth replied, turning towards the twin infernos. “After you then,” gestured Dr. Death as they strode confidently towards the hungrily sputtering flames, twin skulls reflecting the fire held high, ancient vizors aglow.