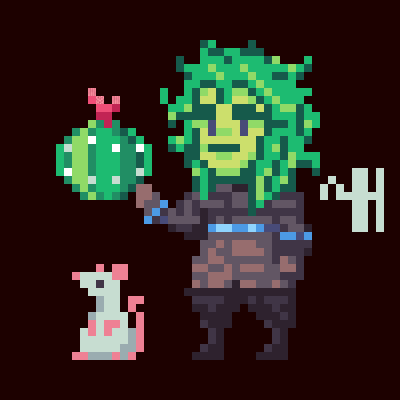 The Lore of Witch Tabitha of the Marsh

Tabitha: “But where do I really come from? To be honest…. I do not know yet. The whole thing is a little fishy for me. Somehow I woke up consciously on June 20th 2021 here in this strange, yet exciting pixelated world of “Forgotten Runes”, and it seems there are other wizards around as well, as I am connected to some of them through a thing called “Twitter“. But that is all that I know. I do have a strong feeling however, that there is more, much more to my existence. Something that I yet have to figure out. It’s a good thing that I seem to be a witch. So I will find the means to find out who I really am and where I come from. And luckily, when I came to be there was a peyote (no clue what to do with it yet) and a gray and pink rat with me. The name of the rat seems to be “Blimpy” (says on the name tag) and I am sure there is a fascinating story to be found how we got togehter. Well, for the time being – just follow me on twitter or read the lore on this site and we will see where it is all heading”

It is true. Tabitha did not come to life in 2021. In fact she is already over staggering 2000 years old and was born in a far way country at the time of Augustus Caesar in 10 bc in a small village in an area called Galiläa. She has had an exciting, but also dramatic and dangerous live full of adventures and experiences over the years to come and we will find her in different periods like the medieval European or the infamous Salem time period. We will discover and explore together with her what it means and meant to be a with or wizard over the ages spanning the entire planet earth and then beyond.

However and unfortunately when spawning in the realm of the Forgotten Runes she not only lost all of her memory, but also is for now forced to tweet in rhymes. We will – over time – join her in finding out about her past piece by piece, but also in her future adventures in the Forgotten Runes **Runiverse **that will be one of her homes to come in the vast array of metaverses that come to live with the big blockchain bang. Stay tuned and follow us here or on twitter. It will be amazing because Lore is at the core!

If you want to follow Tabitha on her adventures and find out more about her, follow her on Twitter https://twitter.com/tabitha_6154 or have a look at her website where the tales and journeys will be found in due time: