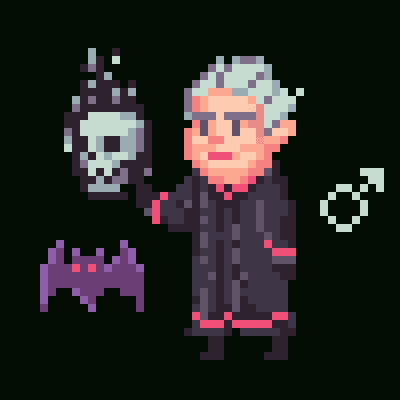 Sorcerer Milo from the Abyss

It is a well-known known fact, or if nothing else a widely shared belief, that the eyes are the windows to the soul. Since the dawn of time, man has thus weighed, judged, and thereby taken measure of character - based on the briefest of glances, or deepest of stares.

A good man, they would say, has eyes from which projects an earnest depth of empathy and decency, while a man of questionable intentions, even one whose soul could be said to be draped in the shroud of evil, should undoubtedly be betrayed by the twin fires subtly shining from the depths of their dark eyes.

Further, there are those who would insist the most painless way to divine the cast from which a soul was forged, whether one of purity and light or of corruption and darkness, lies simply in observing the face as a whole; the eyes to be sure, but also the lines worn from smiles aplenty or frowns from anguish and anger, the twist of crow’s feet from a lifetime of laughs, or the firm downcast lines of lips more attuned to discontent.

This is, as you should be well aware, all folly.

Milo’s eyes had always been kind. His cheeks an intricate map of lines well earned from countless smiles and smirks, the corners of his gentle eyes webbed and wrinkled. Most who had cast their glance on his amicable grandfatherly face would agree that these are the eyes of a kind man; this is the face of honesty and empathy. Of course, most who had experienced the misfortune of locking eyes with Milo were now dead.

Fluttering in and out of the dark corners of the shadowed room, Fluffy was busy inspecting and seeking out the occasional ill-fated insect or small rodent. The purple bat would make certain that there would be no unexpected visitors this night - at least none left alive. He sensed her, like a constant comfort in the back of his head, nestled against his subconscious.

Imagining his familiar’s joy should anyone disturb them here, Milo allowed himself a fond chuckle and turned back to the centre of the cold room, once again scrutinising the altar. It was ordinary enough, more reminiscent of a stone slab than something arcane, aside perhaps from the small rivulets carved out on the surface and the worn symbols barely noticeable running along its sides. However, the naked body strapped down and stretched taut against the frigid stone was anything but ordinary.

As he slowly approached, his kindly eyes running up and down the large figure, he absentmindedly channelled the Rune of Mars, the crimson shape flaring to life immediately casting the room in a hellish light. With his favourite death spell now an incantation away, Sorcerer Milo from the Abyss slowly strode towards the altar, still smiling to himself.