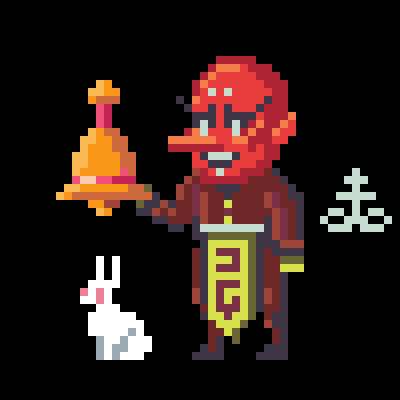 Bard Tengu of the Keep

Listen well, my brave travelers, For I have a tale to tell, Of dangers lurking in the woods, And secrets waiting to be felled.

Beware the twisted paths ahead, And trust not what you see, For the forest is enchanted, And will test your bravery.

The Dream Masters hold the key, To secrets you seek to find, But tread with caution on your quest, Or you'll lose your peace of mind.

Beware the twisted paths ahead, And trust not what you see, For the forest is enchanted, And will test your bravery.

The lake in the center of the forest, Is where you must make your way, For there you'll find the answers, To light your darkest day.

Tengu finished singing his ballad and watched as the group of adventurers listened intently to the words of the song. They bade farewell to him and set off into the woods, with the melody of the song still lingering in their ears.

Tengu watched them disappear into the trees and then turned back to his small inn, nestled at the edge of the forest. He had seen countless adventurers come and go, and this was just another group in his eyes.

As he tended to his inn, the peacefulness of the clearing enveloped him. The rustic building was his home, and he had always lived a simple life, respecting the Dream Masters who controlled the forest. The inn was a place of refuge for those who sought to venture into the woods, and he was content in knowing that he provided a service to them.

He played his lyre and bell, the melodic sounds filling the clearing. It was a familiar routine for him, and it brought him a sense of comfort.

The birds sang, the wind rustled through the trees, and the sound of his own music added to the tranquility of the place.

He knew that this was his place and that he would continue to live here, providing a service to those who sought it. He doesn't think about the future or the significance of the song he had just sung.

He just lives in the present, providing a peaceful refuge for those who need it before they venture into the unknown territory of the Dream Masters.