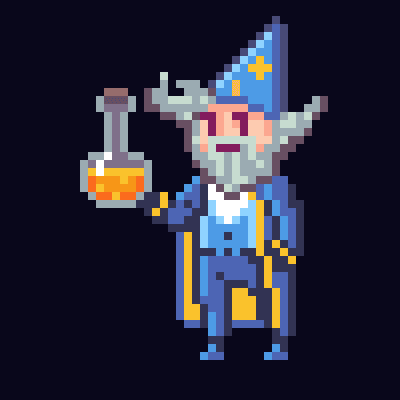 Alchemist Silas of the Keep

Silas was a powerful wizard who lived in a grand keep atop a mountain peak. He was renowned for his mastery of both magic and alchemy, and his knowledge and power were respected by all who knew of him.

Silas was a solitary figure, dedicating most of his time to his studies and experiments in his laboratory within the keep. He was often seen wearing a pointed wizard hat, which was said to have been passed down from a powerful sorcerer of old.

Despite his reclusive nature, Silas was known for his quick wit and clever tongue. He was not one to shy away from a clever remark or witty banter, and many tales were told of his clever comebacks and one-liners.

Silas' true power lay in his alchemy. He was able to create powerful potions and elixirs, capable of granting immortality, restoring youth, and even bringing the dead back to life. He was also able to transmute base metals into gold and create powerful magical artifacts.

Silas' reputation as a master alchemist and powerful sorcerer drew many apprentices and seekers of knowledge to his keep, but he only took on a select few as his students. Those who were fortunate enough to study under Silas were said to have gained immeasurable knowledge and power.

Despite his great power and knowledge, Silas was a humble and benevolent wizard, using his abilities for the betterment of all those around him. He will always be remembered as a wise and powerful sorcerer, whose legacy will live on through the ages.