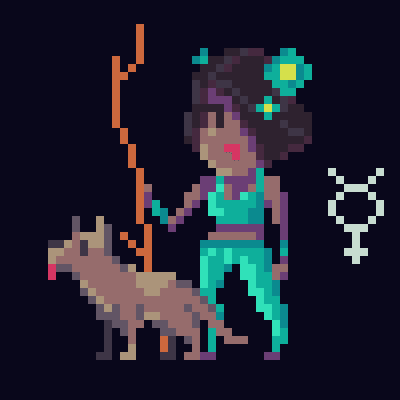 The Lore of Shaman Thana of the Riviera

AFFILIATION: Member of the Canis Coven

STRENGTHS: Very kind and trusting, and always sees the best in others despite being bullied as a child

FLAWS: She is a bit of a pushover, has trouble “reading the room” and her naivety means she is easily deceived. Some find her relentless positivity irritating!

FUN FACT: She is extremely technophobic and will cast “healing” spells on gadgets, rendering them unusable!

BACKGROUND: Shaman Thana was raised near the Chronomancer’s Riviera in a small water tribe that shunned technology and modern civilization. She never quite fit in among her own people as she lacked the ability to use magic to commune with the water spirits they worshiped. However, after abandoning her people she discovered she did indeed have latent abilities and her greatest joy is discovering new spells to help others. Having lacked companions growing up, she now bonds closely with whomever she considers a friend- whether they agree or not! Thankfully her kindness usually wins over even the most stubborn of hearts.

Thana grew up near the Chronomancer’s Riviera amongst a tribe of reclusive fisherfolk who shared an ancient, magical ability to speak to fish and coax them from the water. From a young age, however, Thana was found to lack this ability.

It was customary for children to keep pet fish in little glass jars to practice their skills on, but Thana was unable to hear even a whisper from her own fish. As the other children became more and more adept, Thana languished. She was an embarrassment to her family who believed she lacked the willpower to succeed.

As she grew older, her failings only became more pronounced as she struggled to contribute to her tribe’s fishing practices and participate in their elaborate religious rituals involving communication with the river fish spirits. Over time she became an outcast, and it was questioned whether she truly belonged in the tribe at all.

Finally, at the age of 16, she mustered up the courage to do what she so had often dreamt of doing: she left. Penniless and knowing little of the outside world, Thana wondered how she would make it in the great beyond. All she knew was that she could not last another day shunned by her own people. She carried nothing but a small pouch of food and a walking stick.

After a day’s walk she wandered into the Chronomancer’s Riviera and was quickly overwhelmed by the bustling chaos of the city and its technologies. Feeling provincial and out of place amongst the colorful citizens, she hugged the shadows and tried to become invisible. Night soon fell and Thana realized she needed a safe place to sleep. The city became even more alive as music and lights flooded out from all the trendy nightclubs and venues that lined the streets. Thana longed to ask for help, but was too terrified to approach anyone. Besides, the partygoers seemed far too preoccupied with their festivities to notice a girl like her.

Thana slipped into the darkened alleyways, looking for an alcove to take refuge in. Here the alleyway denizens eyed her suspiciously or leered at her as she hurried along. Fear rose in Thana’s chest. Had she made a horrible mistake coming here? Should she go back home and beg for acceptance? A loud yelp of pain interrupted her thoughts. Following the sound, she encountered a street dog being kicked by some kids her own age who had clearly been drinking. To her amazement, she could hear the dog’s voice, clear as day, as it barked at its attackers. “Leave me alone, you filthy brats! Ow! Help!”

Forgetting her timidness in the moment, Thana found the courage to confront the teens and chase them off with her wooden staff. As she knelt beside the injured dog he told her his name: Koyotl, and expressed his gratitude for her help. “I owe you my life. The code of the desert says I’m to be your companion and guard your life as you guarded mine.” He winced with pain. “At least as soon as I am able to.” Thana could not fathom how she was able to communicate with the creature after being unable to use magic previously, but she was profoundly grateful.

She laid a hand upon Koyotl’s flank and a soft green light emerged from her touch, startling her. To her amazement, her latent magical abilities blossomed before her eyes as she healed the dog, mending his broken ribs with a mere touch.

“You have a gift,” Koyotl told her. “You should claim your rune and unlock your potential at the Secret Tower.”

“The Secret Tower?” Thana had never heard of such a thing, and it sounded vaguely ominous. And yet, at Koyotl’s words she felt a magnetic pull inside her chest that told that her this was where she needed to go.

“How do you know so much, Koyotl? Where are you from?” she asked. “I’m an outcast just like you,” he replied simply. “Now let us rest. We have a long journey ahead.”